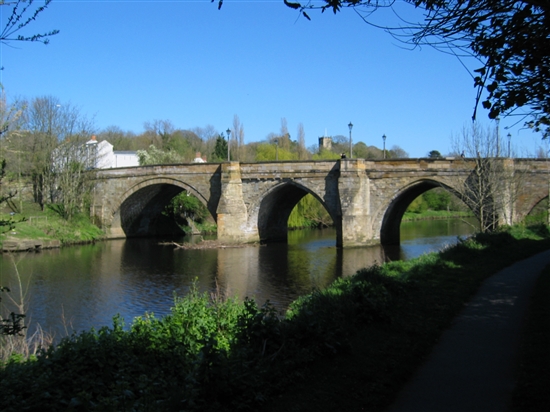 Start time and duration: uncertain time during the day lasting around one hour

Location: accurately located at the bridge in Yarm

A royalist force brushed aside a much smaller parliamentarian contingent, allowing munitions to be delivered to York.

The Battle of Yarm took place on 1 February 1643 and was fought across the medieval stone bridge over the River Tees, joining the settlements of Egglescliffe, Co.Durham, to the north and Yarm, North Riding of Yorkshire, to the south. A parliamentarian force, following on from its defeat of a royalist escort force for a munitions convoy being raised at Guisborough (16 January 1643), attempted to prevent a much larger royalist force and munitions convoy from crossing the river and continuing its journey from Newcastle to York.

The parliamentarian force, consisting of about 120 horse, 400 foot and two light field pieces, arrived from Guisborough soon after the engagement there and prepared the bridge, the small settlements of Yarm and Egglescliffe and possibly a small gun emplacement at Egglescliffe established during the Bishops’ Wars overlooking the bridge, for defence against an expected large munitions convoy and escort.

The royalist munitions sent by Queen Henrietta Maria from Holland had entered the River Tyne at Tynemouth and been unloaded and transferred into waggons and onto pack animals to be transported to York to supply the Marquis of Newcastle’s northern royalist army but mainly the king’s ‘Oxford Army’ in the south. The convoy’s departure from Newcastle had probably been delayed with news of the defeat of a royalist escort force being raised at Guisborough, but it set off in late January 1643 guarded by a substantial force, probably up to 2000 men.

When the royalist advance guard arrived at Egglescliffe on 1 February it seems to have quickly overcome any resistance from the small artillery emplacement protecting the bridge. There is one entry in the parish register referring to the burial of an unknown soldier in the battle. From the high ground and possibly the vantage point of Egglescliffe church tower, the royalists probably took advantage of ford crossing points upstream and downstream of Yarm bridge but made a main assault on the bridge, probably using foot and/or dragoons.

The parliamentarians, who may have set up barricades on the bridge and positions in the yards, gardens and even the buildings backing onto the river, were quickly overwhelmed, losing over 30 men killed and many wounded and captured, others fled. The prisoners were marched to Durham. The defeat may have helped influence parliamentarian Sir Hugh Cholmley’s to change sides a few weeks later. The victorious royalists successfully delivered the munitions to York a few days later and established secure supply lines over the River Tees.

In the days following, the northern arch of the bridge was broken through and a temporary wooden drawbridge installed to prevent further incursions of parliamentarian raiders into County Durham. This was rebuilt in a slightly different style after the war, although the substantial part of the upstream remains of the medieval bridge over which the action took place can still be seen.

The centre of the battlefield is still a busy bridge crossing, with the single carriageway, widened to two carriageways in the 18th century, carrying heavy traffic in and out of Yarm on the A135. There are footpaths along the Yarm side of the river, upstream to Yarm Church, and on the opposite side, up the hill to Egglescliffe village with its historic medieval church, green and late 17th/18th century houses.