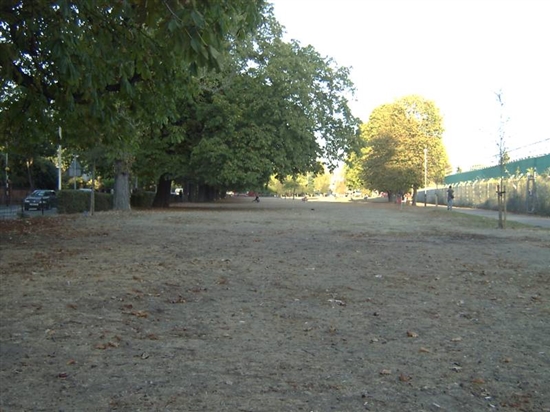 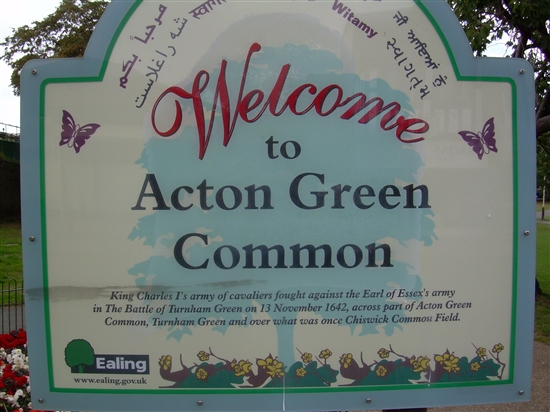 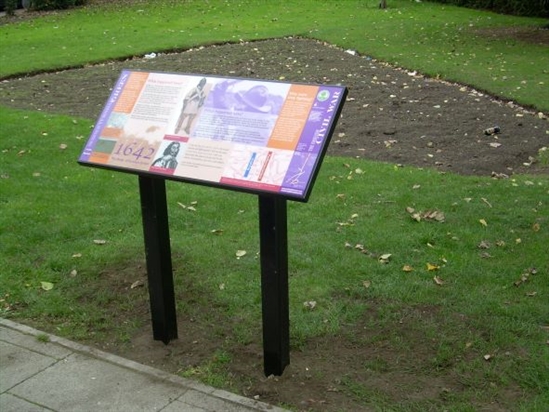 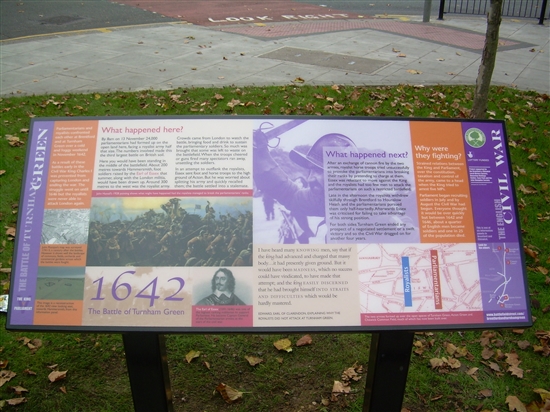 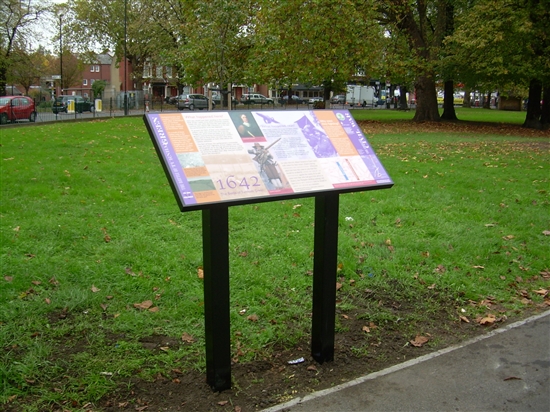 Armies and losses: Royalist: army of around 12,000 men commanded by Patrick Ruthven, Earl of Forth, but with King Charles I present; Parliamentarian: army of circa 24,000 men commanded by Robert Devereux, third earl of Essex with Sergeant Major General Philip Skippon in commanding the London militia. Losses: up to 50 in total from both sides, unknown wounded

Location: accurately located on the open ground of Turnham Green, Acton Common and Back Common and the urban area between and southwards as far as Chiswick House. Fought across enclosure and open field

A stand-off with, probably, the third largest numbers of soldiers on a Civil War battlefield but involving only some low-level skirmishing. Parliament nevertheless prevented the King from advancing closer to London.

Following the delay due to fighting at Brentford the previous day, the royalist army had advanced to the western edge of Chiswick Common field and the areas of open land to the north, including Turnham Green, by nightfall.  Regiments of the London trained bands, the earl of Essex's army, the reserve army under the earl of Warwick and some sailors advanced overnight out of London and the villages to the west of the Capital where they were billeted and were deployed on the eastern side of the battlefield by early morning.

Both armies appear to have deployed in traditional 17th century style with cavalry on the flanks and infantry in the centre.  The parliamentarian line extended further than that of the King's army on the northern side of the battlefield and the royalists deployed musketeers in the hedgerows there to counter this threat. These were driven out by parliamentarian troops, which then outflanked the royalists on that side of the battlefield with a march to Acton.  Despite this favourable position the parliamentarian commander, the earl of Essex, recalled this detachment due to the risks associated with splitting his army and the battle settled into a stalemate.  The royalist army was too small to force its way past the parliamentarians and, as night fell, the King had to withdraw.

Recriminations occurred on both sides following the battle.  On the royalist side, there were some who judged the King had missed an opportunity to end the war, though in reality had he launched an attack on the parliamentarian lines his own army would probably have been defeated.  Others on the parliamentarian side, who saw Turnham Green as a missed opportunity to defeat the royalist army, particularly following the successful outflanking manoeuvre, probably had more of a case.

Turnham Green is now largely encompassed by the urban development of Greater London. However there are limited areas which remain undeveloped – parts of Turnham Green and Acton Green, though now municipal parkland, provide a sense of the open ground, which extended as far south as Chiswick House in the 17th century.