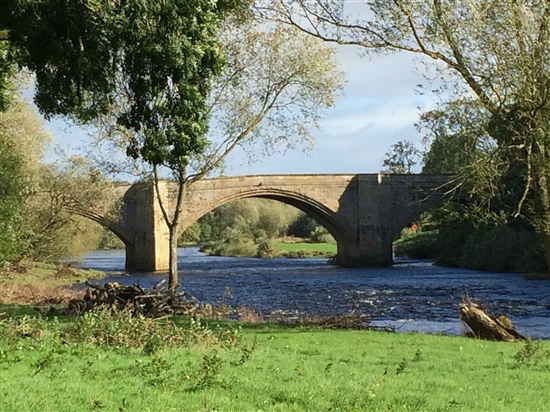 Start time and duration: during the day lasting for around one hour

Armies: Royalist with about 6-8,000 men;  Parliamentarian with around 580 men. Losses: low numbers lost on both sides

Location: accurately located at Piercebridge with fighting across the bridge

The battle of Piercebridge took place on 1 December 1642 and was fought across the medieval stone bridge over the River Tees, joining the settlements of Piercebridge, County Durham, to the north and Cliffe, North Riding of Yorkshire, to the south.  A parliamentarian force commanded by Captain John Hotham, following on from its defeat of a small Royalist force at Darlington on 9 November 1642, moved to defend the river crossing to prevent the anticipated march of the Marquis of Newcastle’s newly raised northern royalist army from Newcastle to York.

The parliamentarian force, consisting of about 180 horse, 400 foot and two light field pieces, faced Newcastle’s army of 6-8,000 troops, which the City of York had requested be march south to protect the city from parliamentarian threats from the west (Lord and Sir Thomas Fairfax) and the east (Sir John Hotham at Hull & Hugh Cholmley at Scarborough). The royalists included an advance guard of Sir William Lambton’s Regiment of Foot and Thomas Howard’s Regiment of Dragoons, plus some ordnance.

This latter force, marching down Dere Street, probably met parliamentarian resistance from outlying forces in the yards, gardens and buildings of Piercebridge, which was driven back over the bridge. The bridge was barricaded and covered by fire from the parliamentarians’ two light guns, perhaps positioned on the bridge or on the high ground at Cliffe overlooking the bridge and river. Secondary accounts suggest that royalist ordnance was set up on Carlbury Hill, high ground to the north east of Piercebridge and was used to ‘soften up’ enemy positions surrounding the bridge.

The royalist advance guard of foot and dragoons assaulted the bridge and Colonel Thomas Howard, leading his dragoons, was killed in the action. He was buried at nearby High Coniscliffe Church the following day. Hotham and his parliamentarians seem to have retired under the cover of a rear-guard action (suggested by finds of concentrations of lead shot) on the high ground south of the river and made haste south to eventually join Lord Fairfax’s main army at Tadcaster. Newcastle’s army arrived in York on 3 December and went on to engage Fairfax at Tadcaster on 6 December. The royalists consolidated their position around York but their supply lines to the north were still threatened by the parliamentarians, resulting in subsequent engagements at Guisborough (16 January 1643) and Yarm (1 February 1643).

The centre of the battlefield is a busy bridge crossing.  The medieval bridge single carriageway over which the battle was fought was widened to two carriageways in the 18th century and today carries traffic through Piercebridge and Cliffe on the B6275. The footprint of Piercebridge village, based inside the remains of an important Roman fort, is probably not much larger than it was in the mid-17th century, although few buildings from that period survive. An exception is the western end of The George Hotel, the interior of which has 16th/17th century fireplaces and was likely used by the parliamentarians. On the high ground above Cliffe is an earthwork which could be the remains of a small artillery emplacement.