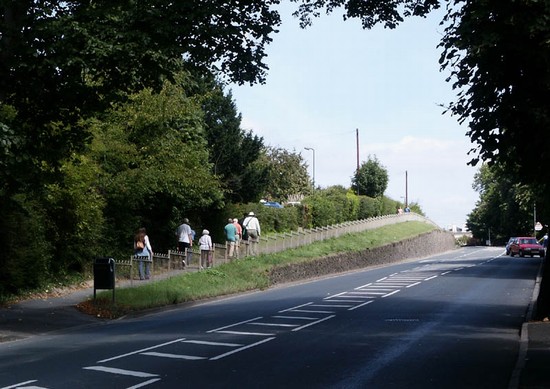 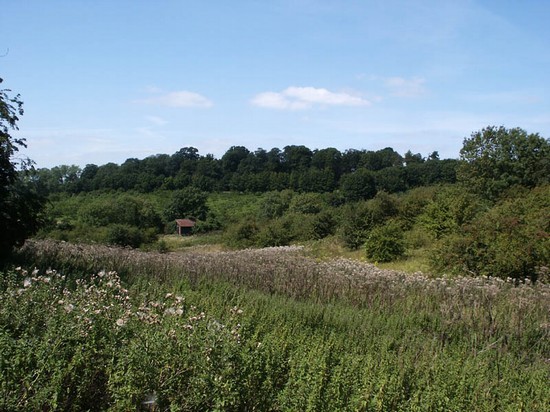 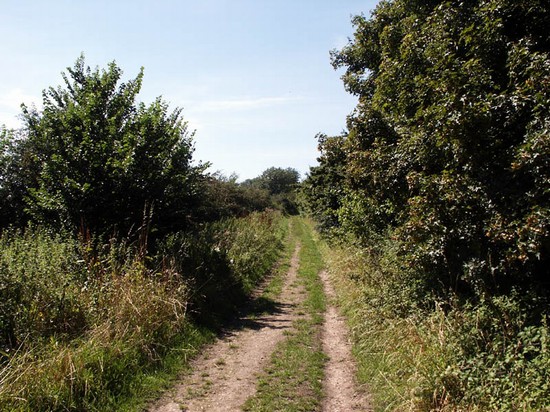 Evesham and the battlefield are encompassed on three sides by the river Avon. Cox provides by far the best discussion of the historic terrain. However much remains to be done in reconstructing the landscape as it was at the time of the battle, for as the Lanercost chronicle says, de Montfort was killed in a place called Godescroft, indicating that there were enclosed fields somewhere on Greenhill in the 13th century, with significant implications for the interpretation of the terrain and the deployment of the armies.

Meadows lay along the narrow floodplain of the Avon while open fields may have encompassed much of the remaining area. There is some evidence of ridge and furrow adjacent to Abbey Manor House on the 1940s aerial photographs, but it is unclear how extensive the open fields were or even if this ridge and furrow is of medieval date. To the north, in Lenchwick parish, an area of heath is recorded on the 18th century map, and Cox has argued that Greenhill may have been common pasture in the 13th century.

In the medieval period a single bridge at the south east side of the town led across the river. From the town the main road led north to Alcester, ascending Greenhill. Branching to the north west below the hill was the route to Worcester which, at least in 1675 and thus well before the turnpike was created, skirted the lower slopes of the hill and then continued along the north side of the Avon to Worcester. It appears since to have moved slightly lower down the slopes below Abbey Manor due to imparking around the House. On the parish boundary at the north of the parish the Salt Street ran from the Worcester road on the west up onto Greenhill along the line now known as The Squires. There it crossed the Alcester road and ran down what is now Blayney’s Lane to to cross the Avon over Offenham bridge.

Ramsay had de Montfort deployed on the ridge where the Obelisk now stands. The arguments for dismissing this interpretation were presented by Burne.  Various more recent interpretations of the battle have suggested the approach of the royal forces from several different directions, the army being split by Prince Edward. Young & Adair, broadly following Burne, have all the troops approaching for the north east, having crossed the river at Cleeve Prior. Mortimer is then shown advancing on the east side of the Avon to Bengeworth bridge to close off de Montfort’s line of retreat. Edward approaches across Offenham bridge and de Clare southward along the Alcester road to deploy on Green Hill, just to the north of the battle well. Smurthwaite and Seymour also have a similar deployment. Carpenter follows a broadly similar deployment but with Mortimer approaching Bengeworth from the west, on the Pershore road. It might have been considered unlikely, given that the numbers of troops involved, that Edward would have split and thus weakened his army in this fashion.

The Evesham chronicle says that it was near Siveldestone that Edward’s divided forces into three divisions and ascended the hill. Cox has demonstrated that Siveldestone is almost certainly Siflaed’s stone, a boundary marker on the late Saxon boundary of Evesham, a short distance to the west of Offenham bridge. It is described by Tindal and by Ireland in the 18th century and, though removed by the early 19th century, its position can be clearly identified. But this could be a fairly general identification of the location of the army being at the northern edge of the parish.

Burne depicts de Montfort deployed immediately to the south of Battle Well and Edward's army just to the north. Young & Adair, followed by Carpenter, have Edward just to the south of Battle Well. Cox, followed by English Heritage, places the initial deployments further south still, referring to the London Chronicle which says Edward was a stones throw away when de Montfort reached the top of the hill. This has caused Cox, like Tindal before him, to suggest that the action took place just to he north of the brow of the hill.

Battle Well is however first recorded in 1272-3 as a spring where miracles had taken place and the site where de Montfort died. The site of battle well is recorded on the 1st edition 6 inch Ordnance Survey map in the late 19th century and the map of the parish in 1827, when buildings stood immediately to the south of the well. The site can be traced back to the 15th century. To encompass this tradition, Cox suggests that de Montfort may have initially pushed back the royal forces strung out across the hilltop. However it is even more difficult to accommodate the burials found in the 19th century or before at Deadman's Ait, by Offenham bridge, with deployment and action so far to the south. In support of a more southerly location for the action Cox refers to the Lanercost chronicle, which states that de Montfort was killed in a place called Godescroft. However Cox suggests this might be The Croft, where Croft Road now lies, though no record is known of this before the 19th century.

The newly discovered account however may enable an alternative interpretation. It seems to imply that it was de Montfort who deployed first and thus was able to choose the ground, for he viewed the enemy advancing up onto Greenhill. Deploying immediately to the south of the Battle Well would make sense, enabling him to use the valley here to provide some protection for his left flank. There is no other logical place for him to have deployed. If de Montfort did indeed choose the ground then Edward could not have deployed further south than The Squires.

Evesham is one of the few early battles for which a genuinely new primary source has been recently identified, one that has transformed our understanding of the event. This is now a battle where the broad character and location of the action is clearly understood and where the location of the action is fairly tightly constrained by the physical topography. Though there has been 20th century development in the area, a substantial part of the battlefield still remains undeveloped. This makes Evesham one of the few early medieval battles where a visit to the battlefield can be very clearly focussed and a relatively secure outline of the battle provided. For the same reason it is one where there appears a high potential for detailed reconstruction of the historic terrain and investigation of the battle archaeology. Although parts of the battlefield are accessible, a new scheme is being developed which should greatly improve that access and provide the first on site interpretation.