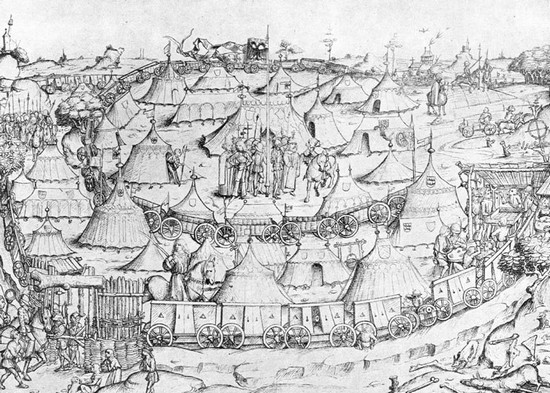 Following the battle of Hastings opposition to Norman rule under William I continued for several years, until the defeat of Hereward the Wake. William’s Norman successors consolidated the conquest until a disputed succession on the death of Henry I resulted in a period of warfare known as “The Anarchy”.

Plantagenet rulers faced a number of challenges, not least from members of their own family. In the 13th Century the unpopularity of King John also resulted in baronial resistance and the sealing of Magna Carta, which when the king ignored it was followed by a war aimed at deposing him. Further baronial challenges to royal authority erupted later in the 13th and early 14th centuries, while more widespread social revolt against unpopular taxes occurred towards the end of the latter.

English attempts to conquer Scotland and Wales, notably by Edward I, continued to meet with resistance, and included two Scottish Wars of Independence as well as Owen Glendower’s rebellion in Wales at the beginning of the 15th century.

The deposition of King Richard II by his cousin Henry Bolingbroke, who was not his recognised successor, destabilised the crown and created a dangerous precedent which could and would be exploited during the 15th century. The first members of the nobility to question the House of Lancaster’s credentials were the Percy family, Henry’s erstwhile supporters. It was only with the final defeat and death of the 1st Earl of Northumberland in 1408 that Henry secured his throne